LOS ANGELES | WORKHOUSE represents the iconic legacy of Max's Kansas City and produced a pop-up of the infamous New York City clubhouse to Los Angeles' inaugural edition of the Frieze Art Fair on Paramount Picture Studios.Some 70 galleries, including local favorites like the Night Gallery and global powerhouses like Gagosian. While the Los Angeles contemporary art scene has boomed in recent years, it’s not clear whether the city can sustain an art fair of this scale. Perhaps in a bid to import some bohemian cred, a pop-up inspired by Max’s Kansas City — the infamous New York clubhouse where Andy Warhol, David Bowie and John Lennon gathered in the 1960s and ’70s — was also staged at the fair. Lending her charm to the space was Yvonne Sewall, a former waitress who married the club’s founder, Mickey Ruskin. She now lives in Kingston, N.Y., where she runs the Max’s Kansas City Project, a charity that gives emergency grants and assistance to artists in need which WORKHOUSE also represents. .During Frieze, Ms. Sewall auctioned off art, rock memorabilia and photographs that regulars gave her. (Proceeds benefit her foundation.) and regaled visitors with stories. Read the New York Times story which detailed the sneak peek. 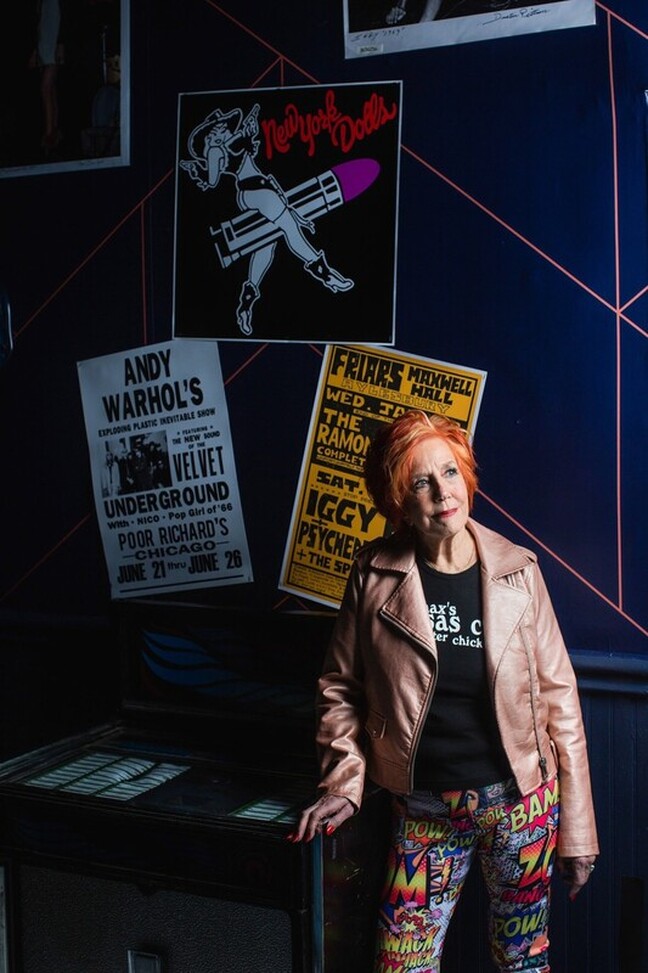 What pieces will be auctioned off at Frieze?

I like Anton Perich’s photograph of the New York Dolls at Max’s. He probably has more photographs than anybody of this place, and this one is fabulous. Anton was a busboy at Max’s. Mickey didn’t let people take photographs in there for a long time. He wanted people to feel like this was their living room and they could party, which is why there aren’t that many.

I love Bob Gruen’s Max’s Kansas City Album Covers. We have the one with the kids in front of it. I also love the Larry Bell watercolor. There is something about this particular work. It’s very subtle, but it really speaks to me.

Francine Tint’s work “Exit Ghost” is amazing. We have been friends for a long time. These people are all my extended family. I love all of them for different reasons

How did you start working at Max’s?

A dear friend, who is a brilliant photographer named James Hamilton, said there is this place that is very hip and the waitresses make a lot of money and are treated like stars. I said, “Yes, that’s the place I want to be.”

I walked into my interview, and there was this man with shiny black hair named Mickey. We had a long interview, and there were a lot of sparks flying in that room. He said, “Well, you seem really flighty, I’m not going to hire you.” I said “No, I’m a very focused person.” He changed his mind. 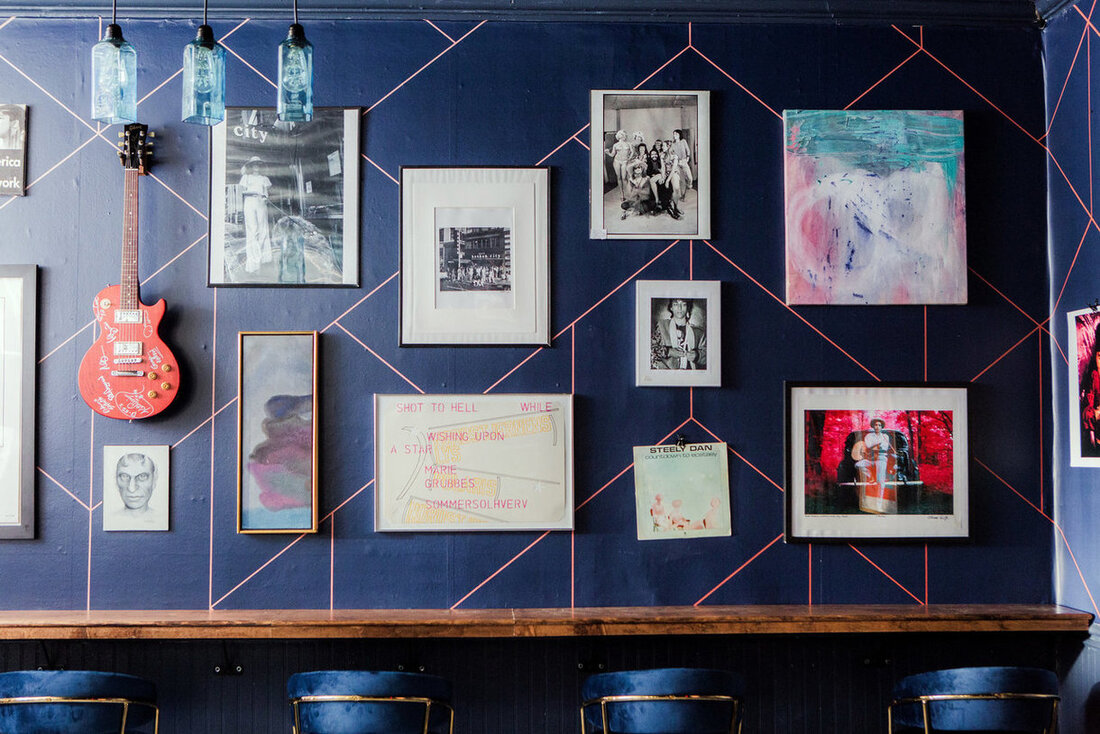 Did you get married right away?

After my interview I went home and told my sister, “I met the man who is going to be the father of my children.” I didn’t even believe in marriage, I was a flower child. But I wanted children.

As a waitress, were you ever intimidated by guests?

One day I was in line behind Bob Dylan. He was playing the French horn. I was standing right in back of him, but I never said a word because what am I going to say to Bob?

Who was your favorite?

Cary Grant was very debonair, and the waitresses loved him. He was so handsome and refined and cultured. He would order one of the most expensive bottles of wine, and he would hand it to the waitress and say: “I would like you to have this.”

Jim Morrison, on the other hand, was in the back room. He would finish his wine, pee in the bottle, hand it to the waitress, and say: “I would like you to have this.” That was the difference between the front and the back room.

Did you meet anyone before they became famous?

I’ll never forget one night I walked in and saw these hippie guys. They said it was their first time here, and they were in town to open for Janis Joplin. They said this is the first and last time we are going to open for anybody because we are stars. They were the Grateful Dead.

You’ve dedicated your life to helping artists. Why?

It started with Mickey. If you were an artist or a musician, you would never go without a meal, you were part of the extended family. If you couldn’t pay, he would take care of it. He would give artists a credit card so they could wine and dine art dealers and critics, and lure them into their studios. That is how they got visibility.

Now with my nonprofit I try to do the same. We’ve done maybe 30 or more fund-raisers, big events for many years like silent or live auctions. A lot of the Max’s regulars have donated pieces for the fund-raisers or performed live. David Bowie, Andy Warhol, Yoko Ono, Aerosmith — all of them have donated. 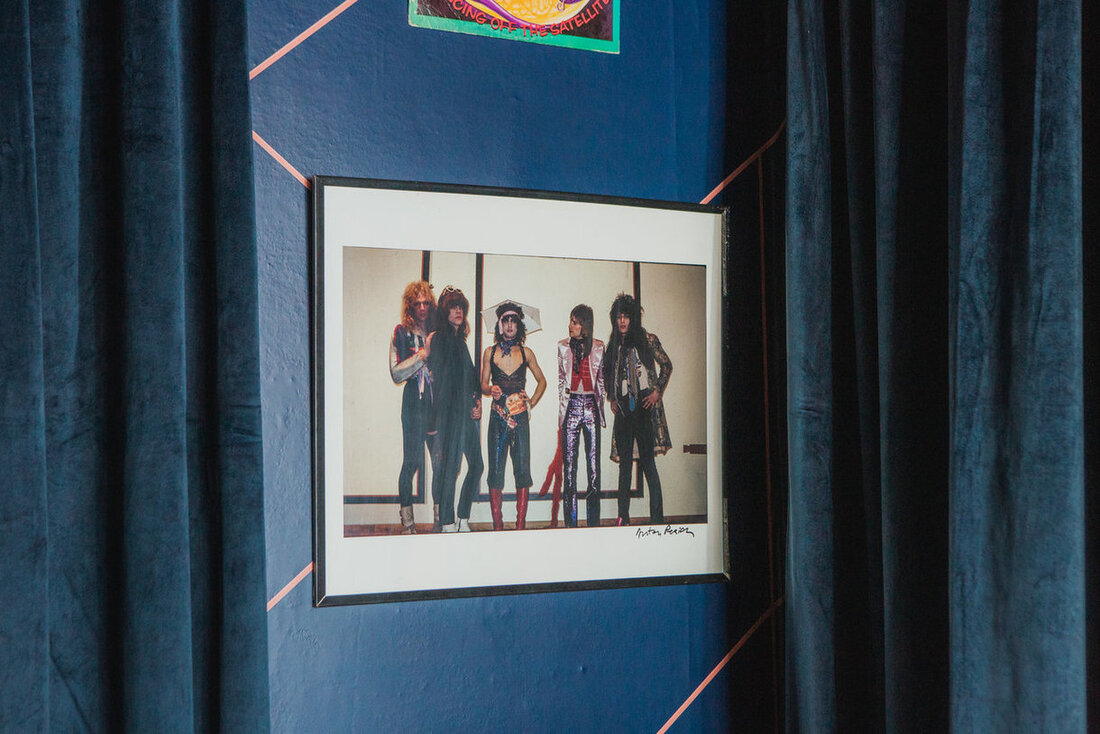 ​Will this re-created Max’s live up to the real thing?

I love that Bombay Sapphire, the British gin putting on the event, is honoring a cultural landmark. I hope it will be just like Max’s, where there are incredible people coming and hanging out and chatting to each other. Max’s was always such a great place for connections. I’m hoping new connections will be made.

What do you make of the Los Angeles art scene?

I’m not actually that familiar with the L.A. art scene. I did spend a short amount of time living in Silver Lake, though many of my memories are spending too much time in the car. For me, L.A. is much more about film and television, so it will be exciting to see the two worlds collide.

YVONNE R. SEWALL first started at Max’s Kansas City as a waitress where she went on to marry founder Mickey Ruskin, father of her two children. During her tenure at Max’s, Sewall assisted in the development of ‘Upstairs at Max’s,’ which showcased unsigned bands that had included Aerosmith, Bruce Springsteen, Velvet Underground, Patti Smith, and the NY Dolls, amongst others. Upon her separation from Ruskin (where the two remained close friends), Sewell managed a number of recording studios throughout New York before dedicating the latter half of her life to honoring Ruskin following his death, including authoring High on Rebellion: Inside the Underground at Max’s Kansas City; founding her nonprofit dedicated to the arts community; and currently working on an upcoming three-part documentary series. 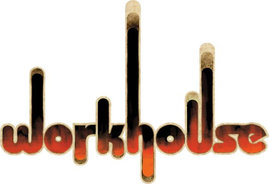